Thanks to everyone who came out to ALICE FEST 2014 today!

Links to information from the festival will appear under the Blog tab later this week. 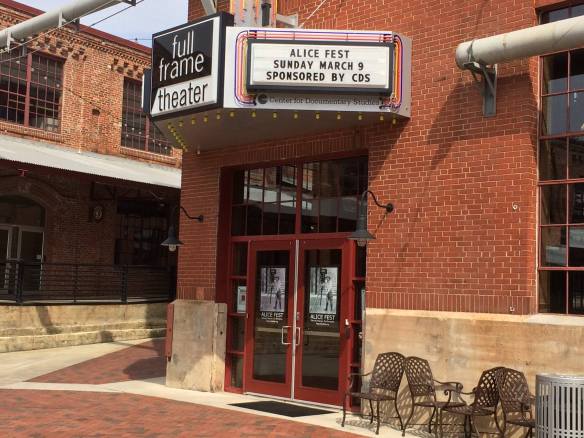 DON’T FORGET!    Spring Forward Time – Set your clocks ahead ONE HOUR before you go to bed on Saturday night so you will be on time on Sunday, March 9, 2014.

Listen to THE STATE OF THINGS on WUNC Radio on Wednesday, March 5th at noon, to hear Vivian Bowman-Edwards, festival director along with filmmakers Carol Bash and Camden Watts, talk about this year’s ALICE FEST.  If you miss it, go to wunc.org/programs/state-things to hear the recorded broadcast.

THE THIRD ANNUAL ALICE FEST IS SUNDAY, MARCH 9, 2014.   Set your clocks ahead one hour before you go to bed on Saturday, March 8th so you won’t miss a minute of the festival!

THE 2014 FILM LINE-UP FOR SHORTS AND WORKS-IN-PROGRESS ANNOUNCED.

FREE and Open to the Public but seating is limited.  Reserve a spot by sending your name to:
infoAliceFest @ gmail.com

ALICE FEST is produced by founder and executive director Vivian Bowman-Edwards and is sponsored by The Alice Project.  Co-sponsors include the Center for Documentary Studies at Duke University in Durham, NC (documentarystudies.duke.edu) and the Southern Documentary Fund. (southerndocumentaryfund.org)